FEATURE: 2000 Series I was Watching on eBay. 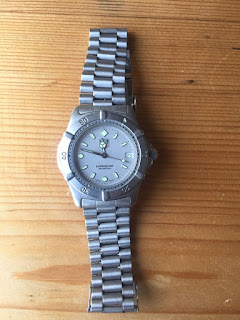 I've been watching this 2000 Series on eBay for the past few days, mainly it must be said, because it had a very low starting price. When I found it it was going for about £120, and for that it looks pretty clean with a nice grey dial.

With my trip to Cheshire Oaks over the weekend I kind of forgot about it but this evening I happened to open my laptop and see it was finishing, indeed it had eight minutes to go and it was around about £134.

Thinking I might bid (and worry about the potential clasp problems later) I very quickly made a search for the part number to double check the diameter of the case. I did this earlier of course and got a measurement of 42mm. I must admit I was skeptical about that, but it was on Watchfinder so I presumed it must be right.

But I wanted to double check, and I presumed it was too late to email the seller to ask for confirmation. So I checked again and found three different sizes for this part number: 42mm, 35mm and 32mm. And two of those were Watchfinder! 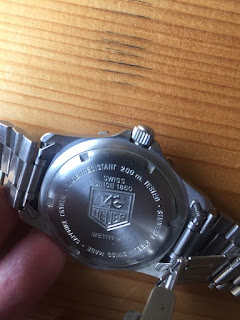 Judging by the finger in that last picture it could be 42mm, but then again maybe not and I didn't want to risk it, because I've been through the whole 2000 Series size issues before and sold both the watches I bought. So in the end someone picked this watch up for the seemingly very nice price of £160.