FEATURE: To Buy or Not to Buy: That is the Question (The Tale of the WAY208C) 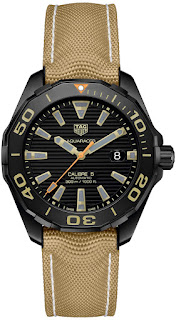 Ever had that situation where you really want something, but it's hard to get and even then there's something about it that you wish was different and then it turns up at a decent price and even the thing that you didn't really like has been resolved... and yet you still can't quite commit to buy?

Well probably not, but that's exactly my experience today. I've been banging on about the WAY208C Calibre 5 Aquaracer ever since 'A Blog to Watch' did their review of it and took it off it's light brown nylon strap and put it on a black rubber Isofrane strap. 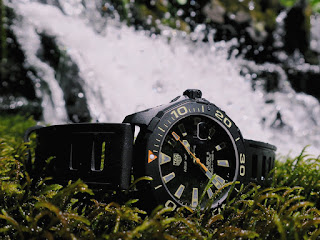 So a while back I managed to track one down to a jewellers in Derby and I was toying with the idea of going up there to see it. But in the end for some reason I didn't, I think partly because I wasn't sure what sort of rubber strap I could get for it (I'd prefer a TAG Heuer strap ideally), the new Aquaracers I could think of that were on rubber had a yellow back and I don't think that would go with the colour scheme. Of course there may be another non-yellow backed strap that will fit, but there's still that wretched cyclops magnifier to contend with.

So imagine my surprise when I came across a WAY208C on eBay today, seemingly in very good condition and one which has had the cyclops removed! 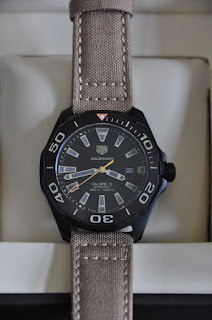 Looks so much better doesn't it?

So it seems like a slam dunk right? £1350 for a watch that's barely a year old and in good condition and with the cyclops already removed... it should be a no brainer. But for some reason, I'm still hesitant to commit to it.

Incidentally, the watch pictured comes with an extra strap, although why you'd buy a strap that looks a lot like the one it came on I'm not really sure. The picture shows the watch on the aftermarket strap, but there are pics of the original strap as well which looks pretty perfect.

I just can't quite work out what's holding me back. The guy has good feedback and the watch is apparently running at +6 secs a day in a watch winder which doesn't sound too bad. Maybe I'm just so tired of buying watches and then having to buy a separate strap because I either don't like or can't wear the strap it comes on. I mean, I've bought three watches now that I've had to change out and I'd really love to just get one as it is. And I'm struggling to understand why TAG haven't issued this watch with the choice of a rubber strap, it's an Aquaracer after all, a dive watch above all else, it seems like they've missed an obvious configuration.

On the one hand I'm thrilled that the cyclops has been removed but on the other it worries me. How was it done? Will it affect the warranty? What about resale? Hmm...

Also, I've started looking at some yellow dial Aquaracers again, you may remember I very nearly bought a yellow dial Aquaracer Calibre S, indeed I went to the Bicester outlet to buy that watch when I found the long sought after Formula One CAU2012 Calibre 16... and bought that instead. 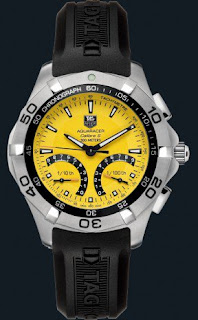 I still like that one, but I've also started to like the Chronotimer Aquaracer as well, which is also available in yellow. 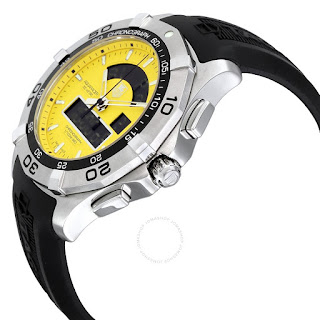 These are both available on bracelets as well, and actually I'm open to that. I do think the black rubber goes well with the yellow dial, but at the same time I do have a lot of watches with rubber straps and only two bracelets.

The other sticking point, is that when I was in Cheshire Oaks the other day I clapped eyes on the black dial Monaco 24 again... now, I thought this was gone and believing that I very nearly bought the orange and grey version when it dipped below £5000 for a brief period (in the Bicester outlet anyway). I'm so glad I didn't because if I had and then I saw the black dial available again I would have been seriously pissed. 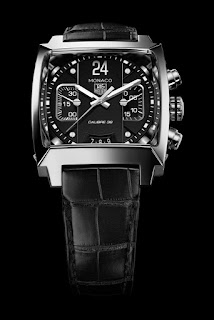 The problem is... my TAG fund currently stands at £1300, and while I could use other savings to secure it, I don't really want to do that (not to mention my wife thinks £5000 is too much to spend on a watch... she doesn't particularly like!) and while I am eBaying hard, it's going to take a while to get the required cash together and there's no guarantee at all that the black dial version will still be available.

The crazy thing is the Monaco 24 is a ridiculous deal in the outlets, it's a thousand pounds cheaper than Watchfinder are selling them for used! But still, you have to cut your cloth according to your means and this would be the most expensive watch I've bought by a HUGE margin, so I really can't just cast caution to the wind and jump in...

Well I could. I guess... but I'm not going to. Besides, I'm off to Bicester at the weekend, so who knows what goodies I might find?