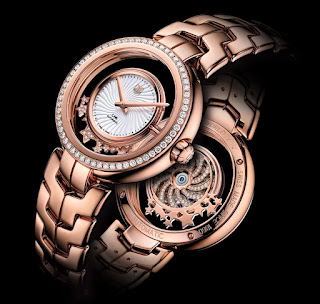 I haven't written an awful lot about ladies watches on this blog, largely because I suspect the majority of my readers are likely to be men and probably won't have much interest. But I have been meaning to write a post about my wife's three TAG watches (she also has an automatic skeletonized Oris) and while searching for pictures I came across this highly unusual piece.

At first I thought it was a fake, but a little further digging reveals that this watch was shown at Baselworld 2012, back when Cameron Diaz was a TAG Heuer ambassador.


It's hard to say whether it was ever commercially available, I'm tending to think not since there's not much evidence of it being sold on the internet, save for a lot of dodgy looking websites selling what appear to be copies. It's certainly a novel idea having the rotor for the automatic movement circling the case, decorated with stars, and if it wasn't ever sold it's a bit of a shame. (Incidentally, you might think the fact that it's called a 'concept' watch would be a clear indication, but yet the Monaco 24 'Gulf' watch is also described as a 'concept' and you can definitely buy that!).

On the other hand I can't quite get my head round the tiny dial and the proportions with the strap. I get that the main case is in proportion with the strap, but it's hard not to focus on the inner dial. Still it's always nice to see pictures of a previously unknown TAG.

The more I search the more it seems this was only ever a concept watch, the majority of articles on the internet seem to be either 'Pinterest' posts or dodgy looking shopping sites in Pakistan (pretty much exclusively Pakistan it seems), so it seems my wife will not be able to have one after all!
Posted by Robert Carrier at 00:16