FEATURE: The Quest to Find an S/EL 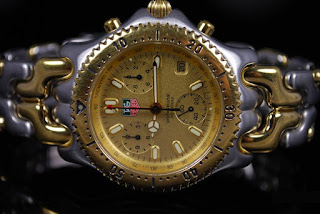 Of all the watches TAG Heuer have made over the last thirty years, one above all others seems uniquely divisive, I'm talking of course about the S/EL (Sports Elegance). For some this is the epitome of questionable taste, in particular the two tone versions (like the example pictured above), but while I agree those particular pieces are perhaps a little gauche, there is just something about the S/EL that makes me want one.

Whether it's that F1 connection, the S/EL was after all the watch of choice for the legendary Ayrton Senna, or simply a nostalgic desire for the 80s and those TAG sponsored Williams and McLarens, I simply don't know, but something draws me to them even though I'm not even sure I've ever actually seen one in the flesh.

The problem though, as I've learned over the last couple of years, is that when you start buying older pieces you have to be prepared for difficulties. Firstly, there's the sizes. I've looked at countless S/ELs on eBay only to get terribly excited until I read '34mm' diameter. I know watches just weren't as big back then, but the S/ELs seems particularly small, or maybe it's just that the larger ones are more coveted and so don't get sent to auction as much (and demand a significant premium when they do).

And secondly (for me particularly) I have a very oblong wrist shape and this means bracelets (and even some straps) can be troublesome for me. I never encountered this problem on any watch I'd owned before until I bought my first 2000 series and I just couldn't wear the bracelet at all because the curved folding clasp dug into my wrist. The same thing happened with my second 2000 and also both my Formula One pieces (although that was a slightly different problem) even though they sported rubber straps. And just the other day I tried on a 500m Aquaracer with a rubber strap and encountered the same problem - it's so frustrating!

So as you can imagine I am very wary now about buying anything without being able to try it on, but where can you try on an S/EL? I'm back to waiting for Watchfinder to get one in and then either having to go to London or having it sent to me to try.

Or so I thought. Recently I've been looking to buy one of these watches, or at least to try one on and satisfy my curiosity. Watchfinder had one or two limited edition versions with 'McLaren 1998' on the face, but they seem to have found themselves new homes and in frustration I turned back to eBay and found a couple of very nice pieces. 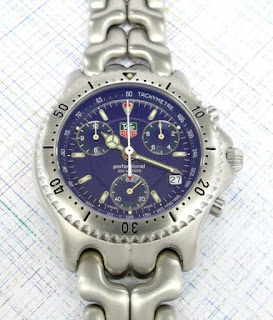 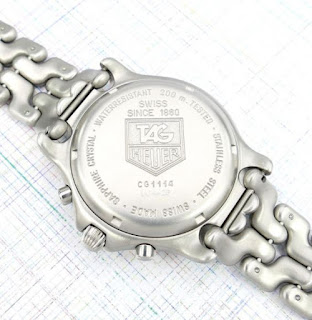 First there was a lovely blue S/EL, a quartz powered chronograph with the model number CG1114, offered with a new movement at £795, and then from the same seller there was a CG1110-0, which is basically the same watch but with a black dial instead. This one was for sale for a slightly cheaper £775. 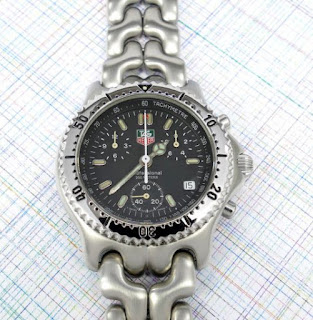 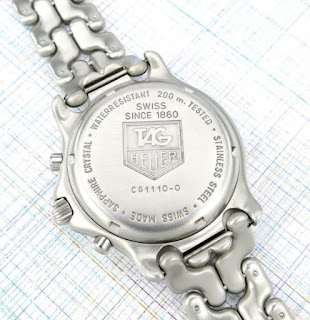 Now part of me wanted to buy the blue one, if only because all my pieces are essentially black and I kind of promised myself that I should try and buy some pieces which expanded the collection into different looks without going to a different brand. So a blue dial fitted the bill perfectly, but then the reason I have so many black dial watches is because black looks great... and the green and red logo looks fantastic on a black dial. I loved my second 2000 series and I never would have sold it if it been a couple of mm larger across the case.

So I was getting a little bit excited, and I was at the point where I was definitely going to buy one of these watches, I just had to decided if it was going to be black or blue. But then the sensible part of me kicked in, and I remembered all the problems I've had with straps in the last couple of years, and then of course I started to get nervous. It's not all straps, I have no problem at all with the bracelet on my F1 Kirium, it's wonderful in fact. And the Aquagraph is also fine, save for it's complete lack of fine adjustment, but by and large I have no issue with the clasp.

So I noticed the seller offers 30 day refunds, but being a cautious sort I decided to approach the seller to confirm the details of their refund policy. I expected a warm reply but got a fairly blunt one, whereupon I tried to explain the reason why I was concerned that the clasp would cause me problems and was told that I should probably not buy this watch and buy one with a leather strap.

While that may be sound advice, I personally think the S/ELs with leather straps look pretty awful. It looks like such an afterthought, because to me the bracelet is such an integral part of the design that anything else looks 'wrong' and I must say the way TAG reworked the cases to accept a normal strap is horrendous! 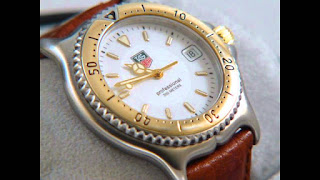 I tried again to explain myself but I was pretty much told the seller had no interest in selling to me on a sale or return basis, and so reluctantly I have accepted that avenue is closed. It's a shame because that seller seems to have a very good record and seems to know what he's doing when it comes to refurbishing TAGs. He has a 100% record on over 2000 sales on eBay, and that's not to be sniffed at. But I have to say, customer service doesn't seem to be a strong point. I mean I would have known within minutes if the clasp was going to be an issue, I had no intention of keeping the watch for 30 days or even more than a couple of days before returning it, and I really wanted to buy it, but clearly the seller didn't want to know. They did suggest I find one to try on locally and that once I had satisfied myself that the clasp was okay they would be happy to supply me. But that's the problem, where do I get to 'try' one on exactly? And even if I could, I would have to be sure that it had the exact same bracelet.

I feel like I'm going around in circles with this, and so I'm pretty much resigned to waiting for Watchfinder to get something in or waiting for a jeweller somewhere to advertise one that I can go and see in a shop somewhere. I don't even mind a journey, I'll drive a couple or few hours if they've got something of interest, but the S/EL just doesn't seem to pop up all that much, at least not in the UK. Maybe they never sold as well in the UK as other places? A lot of them are a little bit gaudy, with spatterings of gold on a lot of models, and brightly coloured straps seemed to be de rigueur as well.

So for now, I'm a little deflated, but I won't give up completely. An S/EL would be a welcome addition to my collection, but only if I can find the right model, in the right size, with the right bracelet... and of course as long as that bracelet doesn't have a clasp which rips my arm to pieces.
Posted by Robert Carrier at 00:37