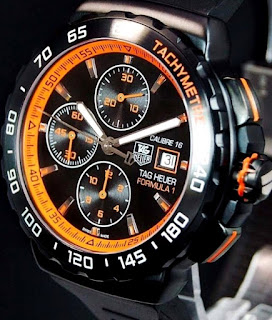 It took me about two years to track down one of these, and when it finally fell into my lap it was completely unexpected. I went to Bicester Village one Saturday with my wife, and while we were there she had been looking at an Ice Cream tub shaped handbag in Kate Spade. I think it was coming up to her birthday so I contrived to visit Bicester on the Monday during the day so I could pick one up for her without her knowing.

At the same time, I wanted to go back to Bicester because on that Saturday I had seen the yellow dial Calibre S Aquaracer and despite trying it on, I had failed to purchase it and I was kicking myself a little, or I at least needed another look just to confirm my decision (or maybe not). Before I left work I was joking with my friend that I was going to come back with the Calibre S 'unless by some miracle that Orange F1 has arrived since Saturday'... You can imagine my utter astonishment when I walked in to find the CAU2012 sitting in the cabinet right next to the Calibre S! 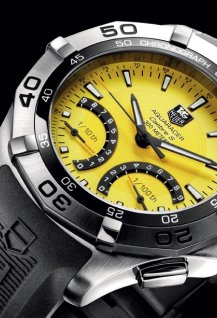 The Aquaracer was a staggering affordable £960 or thereabouts, which considering I've seen them on eBay pre-owned for £1400+ was a VERY good deal. But of course, once I clapped eyes on the Calibre 16 the Aquaracer went out of the window - which I must say is a bit of a shame, because of course thus far I've never seen it again... (and now I'd like to).

Initially I was super happy with my purchase, but it quickly became apparent that the clasp on the FT6038 rubber strap that comes (only) with this particular watch was going to be a problem. Just like the one on my everyday F1 the clasp irritated the hell out of my wrist and I had to look for an alternative.

Unfortunately it wasn't possible to source a different clasp for that strap, so in the end I had to go to a basic 22mm rubber strap, in this case the BT0717 was pretty much my only option if I wanted a TAG branded strap.

I have to say I'm not crazy about the BT0717 strap. On the face of it it's the same design as the BT0714, just a couple of mm wider, but in reality it's so much thicker and more chunky. It's so much harder to put on and getting the tail of the strap into the retainers is a pain in the ass. I mean once it's on, it's solid... but it's a little bit too solid really and lacks any sort of finesse.

But as I say, there wasn't really a whole lot of options available to me, just lately I've been considering changing the strap to an aftermarket model, either a carbon-fibre effect one or a perforated leather type, but I'm still mulling that over at present.... we'll see.

I've had a bit of a funny relationship with this watch to be honest. I've had it just over six months and more than any of my other watches this is the one that I've blown hot and cold with. At one point I even investigated trying to sell it, but I changed my mind in the end. Without a doubt the whole strap thing has tainted my purchase slightly and the one other thing that I find a massive disappointment is the lume. There just isn't enough of it. Literally the only lume on the watch is the hands. No markers, no 12 O'Clock pip, absolutely nothing at all. If it's sitting on a bedside table then good luck telling the time, because you got nothing to go on.

To be honest it never even occurred to me to ask about the lume, in the store I was just so excited to finally see one of these I wasn't thinking quite straight, it wasn't until I got it home that I realised just how stingy the lume was. I get that it's a Formula One and not an Aquaracer, but this watch retails for £2500 which is a considerable chunk of money, for that I think it should be properly lumed up. I think I was especially disappointed because I was expecting the hour markers to be orange lume as well.

For some reason if I haven't worn this for a while I get a distorted memory of what this watch looks like and then the doubts start creeping in and I start thinking should I cash it in, but then I take it out of the box and it impresses me all over again. The picture at the top of this post is a very good representation of the watch, much better than any 'full frontal' picture I've seen. Some might find the orange stripes on the pushers a bit OTT, especially with the orange crown line as well, but I must admit I kinda like it. For sure this is the absolute maximum amount of colour I ever want to see on a watch, and I could easily live with a little less, but even so, this is a fun piece. 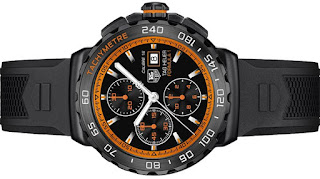 I must admit I find the crown a little bit fiddly to screw down and the movement itself feels quite 'agricultural' when winding, but having spoken to other people about the Calibre 16 movement it seems that it's not unusual. The back is a solid black with some nice detailing, which looks so much better than a steel back on a black case. But then the clasp on the original strap was silver. Why would you do that? You make a bespoke strap which only goes on this watch and then you cheap-out on the clasp - I don't get it.

I don't mind the silver buckle on an old fashioned buckle/pin-style strap, but if you're going for the deployment route, then for Heaven's sake do it properly. I just think it looks cheap as hell... 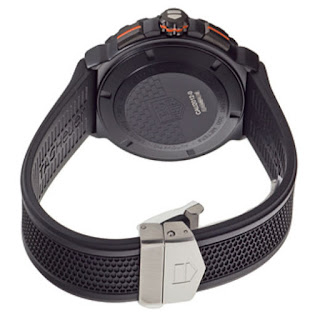 Despite my issues with the lume and the clasp, I still like this watch a lot. I don't understand why I always get these negative feelings towards it when I don't wear it, and of all my watches this is probably the one I would most likely sell first (aside from my everyday F1), which is not to say that I'm likely to sell, just that I'm really un-likely to sell any of the other four.

This is definitely a fun watch and it surprises me how badly it seems to hold it's value, I was lucky to pick this up brand new for £1750 or so, and it's probably worth around £1500-1600 considering it's condition (strap is basically unworn) so I'm not losing a whole heap, but if you paid list then you're not doing so well. I guess some people will love the orange and some people will really hate it, personally I really like it but I wouldn't choose this as an 'only' watch. I consider this a watch I wear out in the day at the weekends mostly, a summer-fun kinda watch.

I guess the fact that I was looking for this for so long put a lot of expectation on it, and the lume thing definitely bugs me a lot, but I'm hopeful that a change of strap might give it a new lease of life. I'm certainly going to be looking into that soon.