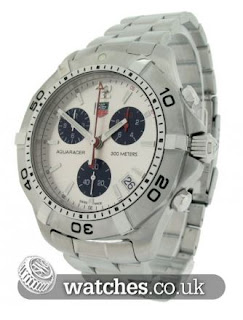 He who hesitates is lost they say, and for a second time I've hesitated too long... the trouble is I just wasn't quite convinced.

I came across this watch on the 'Watches.co.uk' website the other day, and thought it rather appealing. At first I thought the dial was white but it's actually silver... I think if it would have been white I might have bought it straight away, especially since the watch was described as 'mint condition'. However, it was a fairly hefty £895, and a little research showed that the original price was something like £1095. £200 off an eight year old watch seemed a little steep to me, even if it was mint and thus began my hesitation.

I looked on eBay, and found four pieces, albeit only one from within the UK, it was £400 when I found it and eventually finished at £510. It wasn't mint but it did look to be in good condition, so the question is of course, is it worth £385 for a mint watch bought from a jeweller rather than a private sale (with all the risks that go along with that). 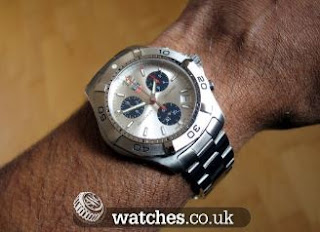 As it happens, it's a moot point because somebody pulled the trigger - hence my assertion that 'he who hesitates is lost', but no matter, it'll come around again sometime. There's also a blue dial version with silver subdials that looks nice too.

The problem is I still haven't really decided where I want to go next with my collection. Watches.co.uk also have a lovely Breitling limited edition Avenger Seawolf Chrono Blacksteel on offer for a very reasonable £2595. 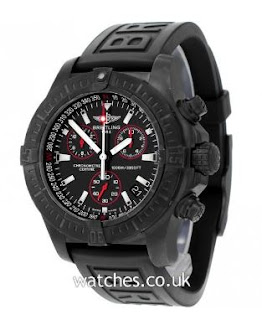 What a beauty, the problem is... the high res photos show some scuffing to the bezel and the side of the case, which is an issue for me. But then this is a £5-6000 watch, so it's priced very fairly. I emailed to enquire about the cost of replacing the bezel and was given an estimate of at least £400. Given this is a special edition piece it's not even certain that a replacement bezel would be available. Such a shame, if this was mint I would definitely be all over it. It's a big watch - 45mm, but that doesn't bother me. It's just such a pity, especially since it's black and can't really be fixed.

Oh well, I'm off to Cheshire Oaks in a couple of weeks so I'll keep my fingers crossed for something exciting in the TAG outlet there.
Posted by Robert Carrier at 20:30